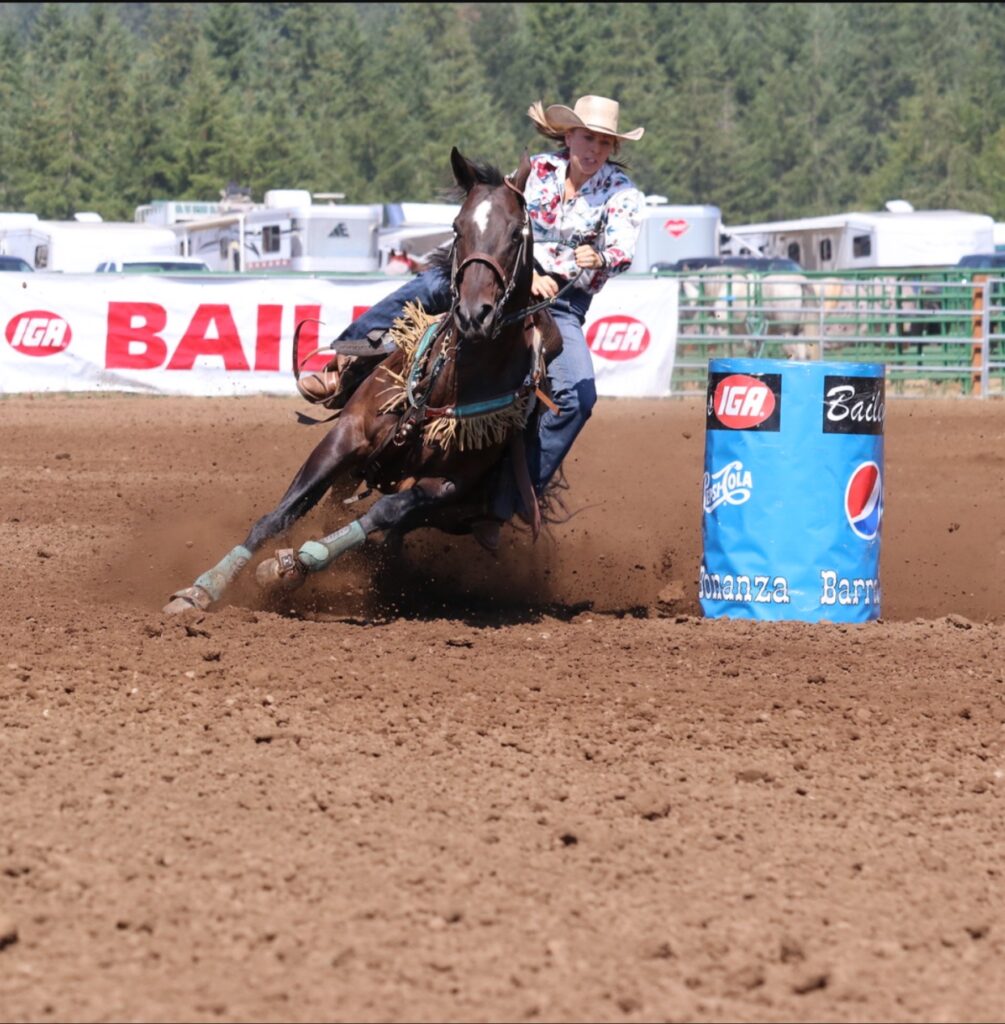 My name is Linzie Lindsey. I live in Arlington Washington and I am a Radiologic Technologist at Seattle Children’s Hospital. I grew up riding horses and barrel racing with my parents. Horses have always been a family affair for us and still are today. I started out gaming and barrel racing and then once I was old enough to handle the pressures of rodeo, my parents mounted me up on the best horse we had and I got to amateur rodeo. In 1999 at the age of 12 I was the WBRA reserve open champion and the NPRA rookie of the year. When I was 14 I ran my first futurity horse who was the first horse I had ever trained myself. Her name was Watch Flit Flight and she was the 2001 Northwest highest money earning futurity horse. My Pro rodeo career began in 2006 on a great horse my dad trained named Azura Dude. Together he and I won an NBHA championship, a BRN4D championship, multiple pro rodeo wins and 4 qualifications to the Columbia River Circuit Finals. It was while competing on Dude that I became a user and believer of Tight Joints Plus.

Dude was a big bodied gelding that relied heavily on his front end to get through a barrel pattern and because of this he was always dealing with some sort of soft tissue injury and inflammation. Since Dude had such great results, now all my horses go on TJP as soon as they start barrel training. I am currently running a 10 yr old mare, Dancein For Cash, aka Bella. She is a grand daughter of Watch Flit Flight and the first mare I ever amateur rodeo’d on. Her career as a barrel horse started out with her winning 3 futurities and placing in 5 others. She won her first amateur rodeo as a futurity horse and placed in the first pro rodeo I entered her in. A medial collateral ligament tear in the spring of 2016 side lined her for a year and a half. As I was bringing her back from that, a chip was found in the knee of the same leg. Surgery removed the chip but the residual arthritis and inflammation is something we will always be battling. Bella made her first runs back in August of 2018 and proved it will take more then some arthritis to keep her out of the winners circle. She was the 2018 NBHA champion and she won the Monroe Rodeo.

Bella has not always been on Tight Joints Plus. When I started running her again last summer (2018) I gave a supplement that was just for arthritis a try. She was on it for 3 months and although she was still performing well enough to win, I knew she wasn’t feeling great. She had no desire to be exercised and it was all I could do to get her to lope around the arena. On top of that, nothing I could do would encourage her to run all the way through the timing lights at the end of a run. I decided to go back to TJP and after just 6 days on it Bella was running and bucking around her pasture and wanted to buck me off in the practice pen.

With Tight Joints Plus back on board, Bella has been beating her old PR’s at every arena we have been going to. In her last three runs she has won a WBRA open race by 1/2 a second and set a new record at Rocky Top Arena in Salkum Washington, she won a Brn4d race with 130 riders by 4/10ths and just recently she won a Brn4d race by almost 6/10th with over 120 riders. Thank you Tight Joints Plus for your great product and for supporting us in our 2019 goals of making the Canadian Finals Rodeo and earning a trip to the Columbia River Circuit Finals!

Keep Up with us